I am a member of the Collective Bias® Social Fabric® Community. This post has been compensated as part of a social shopper amplification for Collective Bias and it’s advertiser, Nestle Coffee-mate. The 4th of July is coming up soon once again. With all the cookouts and fireworks it’s easy to forget the true meaning of the holiday, celebrating our country’s independence. That independence wouldn’t be possible without our military, who sacrifice every day to protect our freedom. Both my mother and biological father, my step-father, a few of my friends, and many people I have known throughout the years have served in the military. Even my husband works at an Army Depot as a civilian, and is involved with protecting the military’s Internet security. All of them were lucky to avoid being injured, except one, my friend Dave. Today I am saluting his memory in just a small way with these cupcakes, made with Nestle Coffee-mate French Vanilla Creamer.

I met Dave Morgan in second grade, and instantly developed my first crush. He was cute, and nice, while most of the other boys were still icky. I know we rode the bus together, I know he was nice to me, and that he was also friends with my friend to this day, Michelle. That is all I remember from back then, but I never forgot him. I transferred to a different school after third grade, and didn’t see him again for 25 years. We lived in the same city all that time, but it wasn’t until one night hanging out at a local bar with my fiancee ( now husband), that I got to talking to this guy and we realized who the other was. We never became close friends , but I would see him at least once or twice a week after that until he went away to Kuwait. He served as a military police officer there, until November 19, 2009, when he suffered traumatic brain injuries after being involved in a collision with an SUV. His partner was killed instantly, but Dave continued to live with the injuries until last summer, when he died of complications from those injuries. I will never forget his viewing, the little boy I had loved was gone at 38 years old, disfigured, unable to care for himself in his final years. I know that this post and these cupcakes can’t bring him back, but this is the best way I felt I could honor him, and all of our military heroes.

Coffee-mate has partnered with Operation Homefront, #CMSalutingHeroes in honor of our military heroes, contributing funds that help to provide a wide range of services to military family. This season they have decorated their French Vanilla and Hazelnut creamers in red, white, and blue, with patriotic stars and stripes. These creamers are only available at Walmart through Independence Day.

I can’t be with Dave to enjoy this dessert, he will never know that I still thought about him all those years later, but this is my coffee moment to share with him. Thank you to #CollectiveBias for allowing me to share this story with you.
I used boxed cake mix in this recipe, because I felt a “coffee moment” should be relaxed and simple. I replaced most of the water with French Vanilla Coffee-mate, and mixed it with instant coffee for just a hint of French vanilla coffee flavor. Baked them as instructed on the box, and set them on a rack to cool. Once they were cooled I began decorating them with red, white, and blue icing and then topped each one with a decorative flag toothpick. Simple, and easy. I hope you get to enjoy these cupcakes this Independence Day with someone you love, and remember to keep the true meaning of the holiday in your hearts. 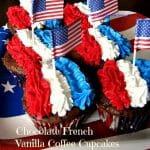