Flavorful Ahi Tuna Steaks with a sweet, spicy, and salty sauce you can serve over the tuna or on the side as a dipping sauce. Quick and easy to make, you will have a fancy restaurant-style dish ready in less than thirty minutes! I had two ahi tuna steaks and wanted to find a way to make them that both my husband and myself would enjoy. I knew he wouldn't want it rare, the way ahi tuna is normally served. He eats sushi with raw tuna, so I guess it's a "if it's cooked, I want it cooked" kind of thing. So, I started looking up recipes for blackened or pan seared tuna, and they were all pretty much the same, with a soy-mustard sauce. I didn't have the right kind of mustard on hand, and wanted something different anyway, so I came up with this recipe with what I had on hand.

I liked the tuna, of course, enough to share it with you today, but I LOVED the sauce! My husband put it over his tuna steak and I used it as a dipping sauce. I can't really say one way is better than the other, but if you want to put it over the tuna I suggest starting with just a little bit. The sauce is spicy! If you would like it a little less spicy reduce the sriracha sauce to ⅛ cup. The recipe for the sauce makes more than you will need for the tuna, but it can be frozen, or I'm sure it would be great with steak or chicken another day. Oh, I just realized! It would make a great sauce for chicken wings! The ahi tuna steaks are simply seasoned with a rub of wasabi paste ( found in the Oriental section of your grocery store, by the soy sauce), salt, and ground ginger, then pan seared for two minutes on each side for medium-well (it will still be pink in the middle). Go with a minute less per side for medium-rare, or 30 seconds per side for rare. 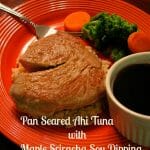 Flavorful Ahi Tuna Steaks with a sweet, spicy, and salty sauce you can serve over the tuna or on the side as a dipping sauce. Quick and easy to make, you will have a fancy restaurant-style dish ready in less than thirty minutes!
Prep Time5 mins
Cook Time4 mins
Total Time9 mins
Course: Entree
Servings: 2
Calories: 907kcal
Author: Bernadette