#BaconMonth is coming to an end. No more bacon recipes. Ever. How sad. Just kidding! Of course there will be bacon recipes, just not twice a week. Haha! Bacon Month has been hosted by the amazing Julie of White Lights on Wednesday with a new bacon focused cookbook giveaway each week. The final giveaway is for a copy of The Bacon Cookbook. You can enter below, but first let me tell you about what I made for today!

I was torn on what to make for the final recipe. I knew I wanted to do something with bell peppers, but couldn't decide whether I wanted it to be an entree or an appetizer, spicy or mild, or which cheese to use. So I turned to my Facebook page and asked my followers: Bell peppers stuffed with chorizo, bacon, and goat cheese (entree) OR bell pepper stuffed with bacon and Gouda cheese (appetizer)? All but one said the recipe I am sharing today! I LOVE my Facebook fans, when they get to see my posts that is. These stuffed peppers are extremely mild compared to what I would normally make, so they would be great for a party with a group of people that don't like spicy foods, or for kids. They are also really easy to make, just 5 ingredients including seasoning. You'll want to serve them hot, but not right out of the oven, so if you are making a bunch for a party I would keep them warm in a 200 degree oven. Gouda cheese doesn't melt in the oven like some other cheeses, instead it gives the peppers a crispy baked cheese topping. If you're like me and would like to add a little bit of spice to them, add just a pinch of cayenne pepper to the cheese mixture.

Giveaway info:  Giveaways are open to US and Canadian residents.  Canadian residents will receive an amazon.com egiftcard in the amount of the book's price.  Winners will be announced within 48 hours, and will have 48 hours to claim prize, must be 18+, and entries will be verifies (no "giveaway accounts"). 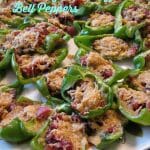 Check out the final recipes made for Bacon Month!