This shop has been compensated by Collective Bias, Inc. and its advertiser. All opinions are mine alone. #FamilyPastaTime #CollectiveBias Baked Pasta Romana with Chicken is a hearty meal with pan-seared chicken and pasta cooked right into a homemade cheese sauce that is great for family dinners or for taking along to holiday pot-lucks. With just a little bit of prep work that can be done days ahead it is an easy to make, filling dinner perfect for the cold days of Winter. Baked Pasta Romana with Chicken is something I had to make more than once to get it just right. Barilla® Pasta is featuring recipes that are quick and easy to make, and also great for taking to holiday parties. I picked up my Barilla Pronto Pasta at Target. I just recently downloaded their Cartwheel app, just in time to find out you can save 20% off of Barilla Pronto before 11/26/2016. Baked Pasta Romana with Chicken is something I had to make more than once to get it just right. I needed to make it as quick and easy as possible without sacrificing flavor or the texture of the pasta. The first time I made it I chopped the vegetables for the dish and sauteed the chicken right before baking it in the pasta. That's just not quick enough for how I wanted the recipe. The second time I chopped the vegetables the day before, cutting about 15 minutes off of the preparation time.

For the chicken, any leftovers or shredded rotisserie chicken will work here! I used thinly sliced chicken breast which I seasoned with salt and pepper and sauteed in olive oil until just browned. Then the chicken finished cooking in the assembled pasta dish. Do whatever works for you! You could even substitute the chicken with beef or seafood if you wanted to. Originally I wanted to bake the pasta fully in the sauce, which is why I used the Barilla Pronto Pasta. A no-boil pasta great for one pot dishes, it is one of my favorites. In this recipe though, I discovered the pasta came out much better if I first simmered it in the cheese sauce on the stove for just a few minutes before baking. When I tried only baking it, I had to remove it from the oven to stir it in order for the pasta to cook evenly way too often, making the cooking time too long. Starting it on the stove first meant I could then place the pasta in the sauce in a casserole dish, add the chicken and spinach (plus extra cheese!) and transport it to any get-together before baking.

Here is the pasta cooked until just bendable in the cheese sauce with onions, red bell peppers, and garlic, then topped with the chicken and fresh baby spinach, This is a great dish to take to a holiday get together. It is filling and flavorful, making it the perfect main dish to be served with light appetizers and desserts. You might want to skip dessert after this, but I suggest just waiting a little bit. It is the holidays, after all! 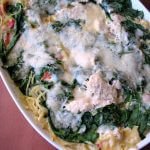 Prep time only includes assembling the casserole, if the vegetables are chopped at the time of preparation, add 10 minutes.