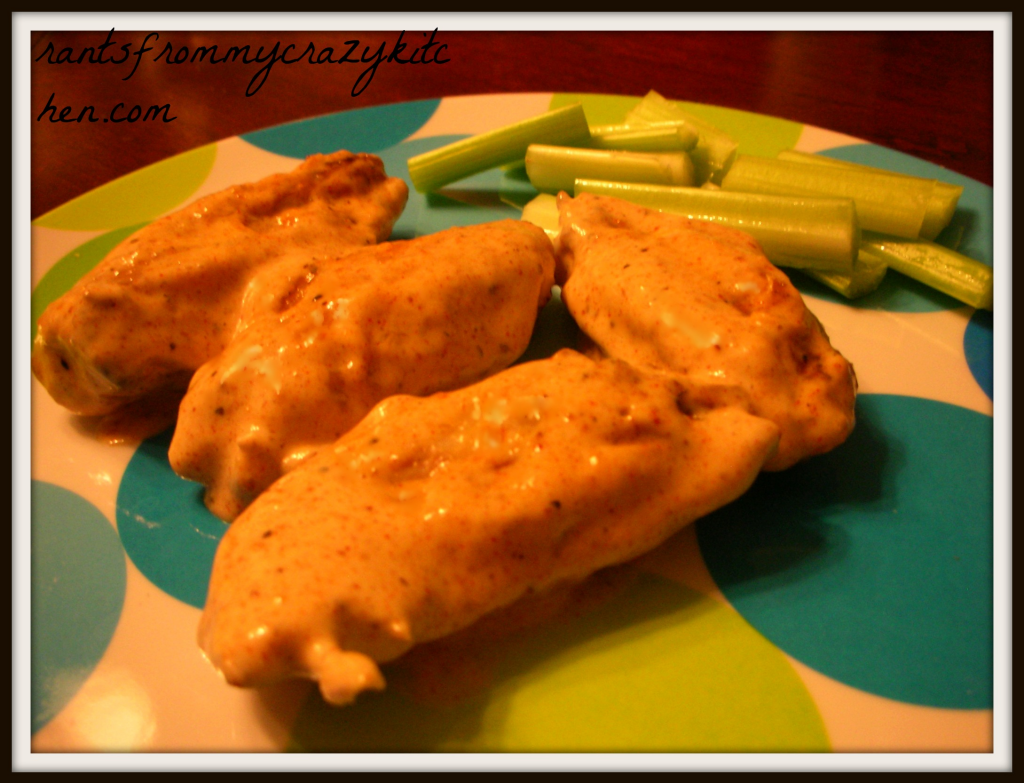 Chicken wings cause me to gain weight! Plan and simple. I should explain, I'm a skinny woman, I was a skinny teenager, a skinny child, and probably even a skinny baby! My mother says I was born at a normal weight, 7 lbs 3 ounces or something like that. I just never gained much after that. I don't really have a secret to why I haven't, which should be obvious by some of my recipes, other than I have never been one to eat a lot in one sitting. I'm more of a grazer. I should start making veggie platters and keep them in the fridge to pick at. Really, that's a good idea, Bernadette. Ok, I should probably stop thinking and typing at the same time.....

I don't remember eating chicken wings as a kid. I probably didn't, I was quite picky back then. Then in my late teens and early twenties I dated a guy and we started ordering wings on the weekends. Like I said, I don't really eat much in one sitting, so for a while I probably would only eat four wings, but then I slowly increased, ok five wings, maybe six, oh well I'm here I might as well eat them all! With that, just once a week or so, I gained 13 pounds in a few years. Yep, I went from all of 93 to 106 pounds!! Yes, I'm fully aware people hate me, you don't have to tell me 🙂

We broke up, I dyed my hair red, and moved on. Ok, it wasn't really that simple, but I'm not going into details because that ex-boyfriend I still consider a friend and he follows my Facebook page. Hi Bob!! Since then I don't eat chicken wings once a week anymore, but maybe once a month. I usually just make hot wings, but if we are out I love the Buffalo Bleu wings at Charlie's Cafe. The last time we were there my best friend ordered Cajun Bleu, I tried a few and LOVED them!

The next time I went to make wings I was thinking of making them, but I was out of bleu cheese dressing. Are you ready for the simplest, so simple I'm not even sure I should consider this a recipe, recipe?

Fry the wings in a preheated (375*F) deep fryer or in oil deep enough to cover in a large pot, 13-15 minutes depending on how crispy you like your wings. In my deep fryer I have to do two separate batches, we eat one batch while cooking the other 🙂  In a bowl large enough to hold the wings, combine the ranch dressing and Cajun seasoning. Pour in cooked wings and stir to coat. My husband said that maybe they could have used more Cajun seasoning, but I didn't want the seasoning to be overwhelming. I would suggest tasting the dressing mixture after 1 tablespoon and then adding more to taste.

What is your favorite kind of wings? Give me different ideas, and if I make them I'll write about them in the future 🙂