I had the weirdest craving for a Pork BBQ sandwich. Those that know me know that is something I would never crave, and wouldn’t even normally want to eat! But, I did and my husband was thrilled when I told him I planned on making it. We have a couple of good BBQ shack type restaurants around here, but they always seem to get overlooked when we eat out.

I started out by chopping up some favorite veggies, carrots, green peppers, and red onions. Then I put a pork picnic shoulder in the crock pot with the veggies, and covered it 3/4 of the way with water.

Then I put the Crock Pot on high, and let it cook for 5 hours. I probably could have gone longer, so that the pork would have shredded more easily, but we were perfectly okay with the pork being chopped instead of shredded. After 5 hours I removed the picnic shoulder from the crock pot and left the veggies in to simmer while I removed the excess fat and chopped up the pork. Then I removed the veggies to a large bowl using a slotted spoon, and drained the water from the Crock Pot, reserving one cup to add into my BBQ sauce mixture.

My husband wanted a sweet barbecue sauce so I made one with brown sugar and molasses. I had never made a barbecue sauce before, sweet or spicy! I just didn’t want to use bottled this time, and felt it was time to expand my cooking skills into barbecue sauce 🙂 I’m pretty sure I’ll be making my own sauce again! Next time I want to try a spicy one. Hmmm….. 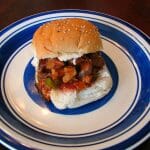