This recipe for low sugar slow cooker cinnamon apples was created by me as part of a shop that's been compensated by Collective Bias, Inc. and its advertiser, Walmart. All opinions are mine alone. #WarmthInACrust #CollectiveBias I'm stuck in a perpetual winter. No, really, around here it seems like winter starts in October and doesn't end until almost May. Since it's only the middle of January, we have quite a bit to go before it starts getting warm and stays warm. During this time, I like to make soups from scratch, chili, and roast, but, more often than not I don't have the hours it takes to do that. That's when convenient, all ready put together meals like Marie Callender's pot pies come in handy. I saw them on a recent trip to Walmart, and they looked good. I wanted to make a complete meal using the pot pie as the entree, and with a salad to start, but what about dessert? Apples! Apples and chicken (the style of pot pie I chose) go together well, but I didn't want to make an apple pie. With the golden flaky crust of the Marie Callender's pot pie, I didn't want to try to compete with that, and besides I wanted something a bit lighter to round out the meal. "Baked Apples? What about in the slow cooker?" I was thinking to myself. It sounded good, but would it still be good using less sugar than would normally be in Cinnamon Apples? The answer is yes, they are! This version of slow cooker cinnamon apples is a bit more tart than the normally syrupy, baked apples, but with an extra sprinkle of brown sugar on top after cooking, they are still sweet and delicious without being loaded with sugar!

I start by slicing up peeled and cored apples and placing them in my slow cooker: then covering them in a mixture of apple juice, brown sugar, cinnamon, nutmeg, and vanilla. Cook on HIGH for only two hours. About twenty-five minutes after starting the cinnamon apples, I put the chicken pot pie in the oven. While the pot pie was cooking I put together a simple salad, and then just over an hour and a half later dinner was served! You can find out more about Marie Callender on their Facebook page, visit http://www.mariecallendersmeals.com/ to learn more about their products, and visit http://potpieplease.com  for more great recipes. Marie Callender's is participating in the Comforts From Home program to help support our troops, you can find out more about the program here http://www.mariecallendersmeals.com/comforts-from-home.

I hope you enjoy this recipe for slow cooker cinnamon apples. 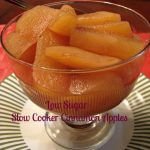