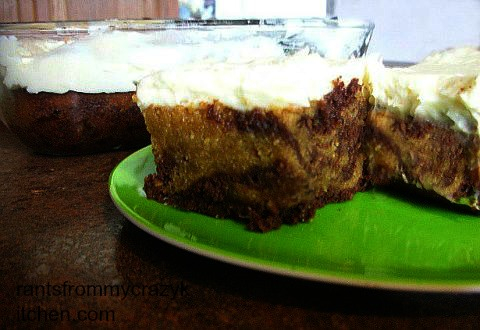 Anyone else bothered by the glowing icing?? I’m going to play with this picture when I have more time, but for now…

I’ve said before that I’m not much of a baker. I will bake desserts occasionally, but my daughter gets enough sugar without cookies and cakes here, and I will eat desserts but not all the time. This thought comes as a shock even to me, who used to eat chocolate every chance I got. I guess it’s true that your tastes change as you get older, because now I crave salty or spicy foods. I also have issues with flour, every time I use it I make a mess!

I do, however, always make some kind of dessert for the holidays and I made these brownies for Thanksgiving this year. Not to toot my own horn, but for someone who doesn’t bake these were pretty awesome 🙂 Oh, I should tell you the texture is a bit more like cake than brownie, but somewhat thinner than cake.

Preheat oven to 350 F. Grease an 8 by 8 baking pan. In one bowl stir together the flour, baking powder, and salt. In a separate bowl stir together the melted butter, sugar, and vanilla, then beat in the eggs one at a time with a large spoon or fork. Gradually stir in the flour mixture until moistened. Divide the batter in half into two separate bowls.

Cover the bottom of the baking pan with the chocolate batter, then spread the pumpkin batter over the chocolate, repeating layers. It won’t be evenly layered and that’s ok!

Bake in the preheated oven for 40-45 minutes or until a toothpick inserted into the center comes out clean. Cool in the pan while you prepare the icing.

1  8 ounce block cream cheese, softened ( you can do this in the microwave for 20 seconds then leave sit out for a few minutes)

Put softened cream cheese and vanilla in a small mixing bowl, then begin whipping with a hand-held mixer, slowly adding powdered sugar until well mixed. Refrigerate until brownies are cooled, then spread evenly over the top.

*Note: This isn’t a really sweet icing, but if you would like it sweeter just add an additional 1/4 cup of powdered sugar at a time until desired taste is reached.