The other day (ok, a few weeks ago now) on my Facebook page I asked how many meals a week my readers make that are homemade. I was a bit surprised at the large number of people who responded that all of their meals are homemade, from scratch! The truth is about 4 meals a week here are from scratch. By meals I mean dinner. My daughter eats cereal for breakfast and I don't usually eat it. Lunch is normally leftovers from dinner. Then dinner is normally homemade without prepackaged foods on Mondays, Tuesdays,Wednesdays, and Fridays.

If I had the time I would love for all my meals to be homemade and from scratch, but for me a least, it isn't realistic. I'm a mother of a 3 ½ year old bold, beautiful, and stubborn little girl. We got a puppy last September, and we don't have the type of yard that I can always let her out by herself, so taking the dog out 6-9 times before by husband gets home right at dinner time uses up the time I could spend cooking. Then there's the housework, and just spending time with my family, and this blog and the Facebook page that goes along with it! There just isn't enough hours in a day to do everything I want to or need to. Some of you know that I have two of my recipes from this blog published in a cookbook by Jodi Ambrose called Darn Good Eats, The Cookbook for Creative Chefs and Reluctant Cooks. Jodi has her cookbook divided into two sections, the creative chefs section and the reluctant cooks section. The creative cooks section is the homemade recipes with one of mine in this section, and the reluctant cooks section features store-bought prepackaged foods some of which are "doctored up" to look like they are homemade. Jodi wouldn't mind me telling you that, she knows she doesn't like to cook and does as little as possible 😉 One of my recipes is in that section, because it's all store-bought ingredients and easy! The cookbook is actually on sale right now, click on her highlighted name above to find out how to get one now!

Now, a bit about the prepackaged and processed foods I do use.

1: Boxed or frozen pastas. I bought a pasta maker over a year ago and haven't used it yet. I want to learn to make homemade raviolis, but I need the time, and nobody home to bother me 😉

2: Jars of pasta sauce and gravies. I know how to make both, I have several recipes for pasta sauces posted on here using fresh ingredients, including my favorite summertime sauce, Fresh Tomato Basil Sauce. I freeze leftover homemade sauce to use again. But, spaghetti is no longer a fast meal when you need to make a sauce from scratch, and sometimes it just isn't worth defrosting the homemade.

5: Kraft Macaroni and Cheese. Again, my daughter. I have tried many times to get her to even try several different kinds of homemade, and she will not touch it! Yes, I am aware that the powdered cheese has artificial flavorings and colors in it. I know it's not the healthiest for her, but I don't believe that once or twice a week is doing that much damage. The child barely eats, I'm going to let her have something she actually likes sometimes.

6: Canned beans, tomatoes, and artichokes. Fresh artichokes are scary looking, and I've heard they are hard to prepare. I really only use them in my Mozzarella, Tomato and Artichoke Salad anyway, so I'm going to stick with canned.

I went so far as to organize my cabinets to take these pictures. You should be scared. I'm scared. 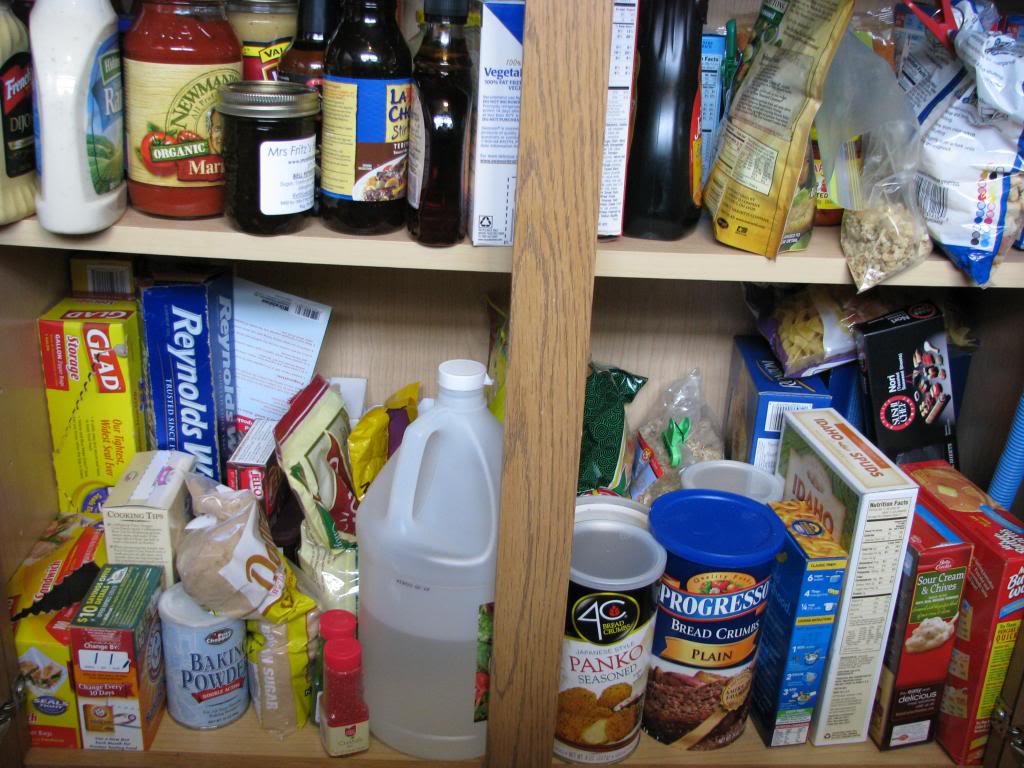 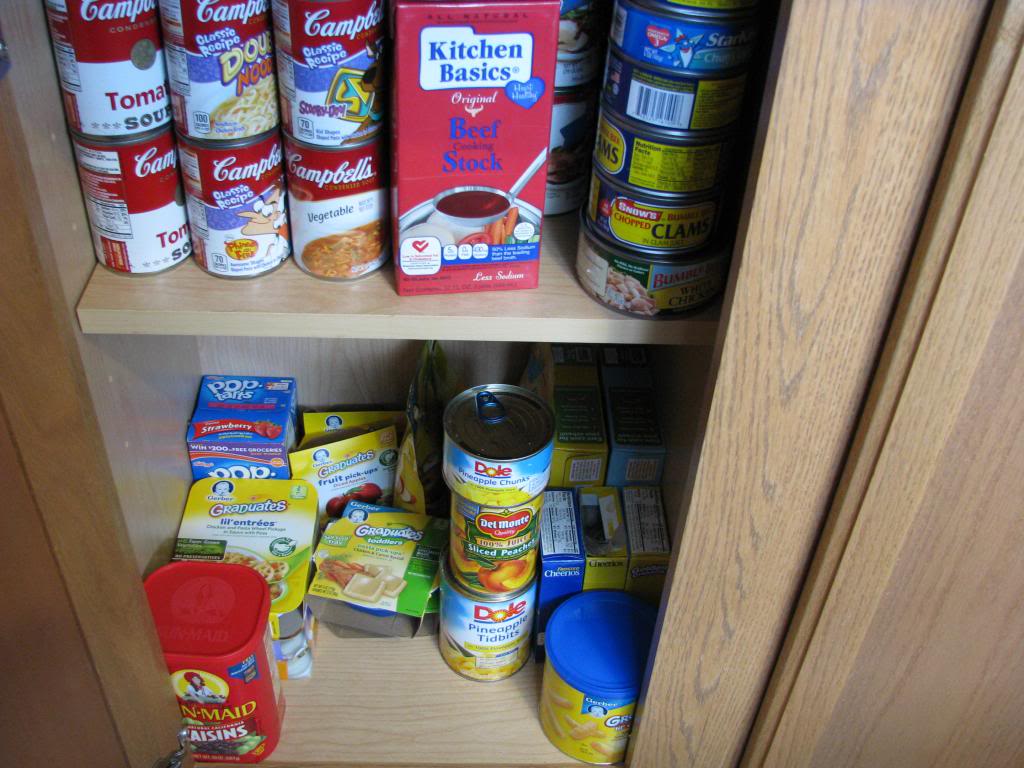 And a bit about what I stay away from....

1: Canned vegetables, other than canned tomatoes and artichokes. They are full of salt and don't even taste anything like fresh. I do use frozen along with fresh. Frozen vegetables are often better than fresh, which lose vitamins quickly after being picked.

2: Foods with ingredients I can't pronounce that are a mile long. I'm a label reader. I know what's in everything I feed my family, then I decide whether it's ok or not.

3: Artificial sugars of any kind. Some low sodium foods. Did you know that when they leave out the salt companies sometimes add artificial flavorings to make it taste better? Diet products with them in. Actually, any type of diet product.

4: Margarine. I use butter in everything. I like butter. Margarine is oil, added chemicals, and coloring. I prefer cream.

5: Recipes with too many processed ingredients. Kind of hard to explain, so I'll give you an example. I once saw a recipe for a soup. This soup "recipe" called for 3 CANS OF DIFFERENT SOUPS IN IT!!! That to me isn't a recipe, it's dumping three cans in a pot and adding some frozen veggies. Get what I'm saying?

There is more, both of what I use and don't, but I'm probably boring you already and I'm sure you get the point. I have one more thing I need to mention, and that is...

A word about fast food and restaurants.

When I asked the question on Facebook, I wasn't thinking about eating out, or ordering in, just what I and my readers make at home, but a few answered with "We never eat fast food" or "We eat at a restaurant once a month or less." so I thought I'd mention it. I'm ok with fast food occasionally ( once a week or less). It's not going to kill anyone. I'm a strong believer in moderation, one bad meal isn't going to kill you, just like that one salad isn't going to make you healthy. Now comes the part where I may lose all credibility as a foodie forever. Something I have never mentioned on here or on my FB page, so only my friend's that follow me know. Are you ready? I used to be a manager for McDonald's. There, I said it. It was never something I was particularly proud of, but it was a job. I even ate it on a daily basis and lived to tell about it, with a very low cholesterol level, too! There are healthy options available in fast food, you just have to choose carefully. Read the nutritional chart posted on the wall. Many restaurants have a "lighter" menu. Most people know what's healthier and what's not, and make the choice to eat the not healthy. And you know what, not healthy is ok sometimes. Just don't do it all the time!

I really have no point with this, just putting out there how I feel about it all. I understand the whole food argument. I know it's healthier. I try to counter the not-so-healthy stuff with healthy stuff the next time.