These Slow Cooker Pork Carnitas are bursting with flavor! Pork shoulder simmered with the perfect blend of seasonings, onions, and garlic simmered in orange juice and lime juice, then quickly fried. You won't want to wait for Taco Tuesday for these! Our daughter has been really into doing Taco Tuesday every week. Amanda always wants the crispy taco shells, so if I use flour tortillas I just give her tortilla chips instead. Her "tacos" are always made like nachos.  Since my husbands heart attack I don't normally make ground beef tacos anymore, or if I do I use 97% extra lean ground beef. Instead, I switch off between ground chicken, turkey, pork, or more rarely fish. Sometimes I get tired of regular tacos, though, and that's where Slow Cooker Pork Carnitas come in. The flavor of the orange juice and lime juice stands out, but isn't overpowering. It isn't really spicy, either, at least not to me. Most importantly, I love that they are easy to prepare! I had corn tortillas that I wanted to crisp up, but I didn't want to add a lot of fat, so I had the idea to spray each tortilla with cooking spray, sprinkle them lightly with salt, and fry them until they were golden. I was still able to bend them without breaking, they were lightly crispy, not too greasy, perfect!

The pork cooks in the slow cooker for on high for 4-5 hours, then take it out and shred it, put it back in the slow cooker with the juices and seasonings for half an hour more. After that, the pork is removed from the slow cooker with a slotted spoon and fried in a small amount of oil until slightly crisp. The result is melt-in-your-mouth, flavorful pork! Top with your favorite taco toppings; I used spinach because we were out of lettuce (and we like it!), diced tomatoes, diced avocado, and shredded Mexican cheese.

This recipe is adapted from The Food Network. 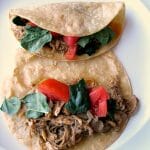 Leftovers may be frozen and then thawed in the refrigerator. Reheat in a saute pan with oil.