Last year on Thanksgiving I made a really good slow cooker stuffing that had bacon and onions in it. Even as I was making it, I was planning on sharing it here. In the hustle of Thanksgiving preparation I didn't take any photos or write down my changes, so I planned on making it again right away.  I had gotten the recipe from...somewhere. But, where? A search of my cookbooks turned up nothing, there were slow cooker stuffing's but not with bacon and onions. There was a bacon and onion stuffing I had pinned, but it wasn't slow cooker. Today, almost a year later, I still have no idea where the original recipe came from. I still wanted to make it again. Badly. So, I made my own version a few weeks ago. This slow cooker stuffing is full of crumbled reduced sodium bacon (low-salt diet for my husband, I've found one that is yummy and only has 5% of a daily value of sodium), making it delicious without being overly salty. I used reduced fat butter, better for you than margarine. I added no salt added chicken stock. Basically, I took something I love and made it as healthy as I could. I didn't sacrifice taste one little bit! I'm pretty sure you will agree! This Slow Cooker Stuffing only takes fifteen minutes to prepare, and is done in two and a half hours. It's great for the Thanksgiving Day rush, or anytime! What is your favorite stuffing? Do you make the same one every year, or try something new? 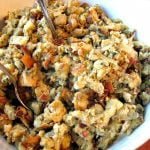