Spinach Artichoke Dip, made with fresh or frozen spinach, canned artichokes, cream cheese, and Gouda cheese, then baked or cooked in the slow cooker. The Saturday after Christmas my friends invited us to their house for a surprise for the kids, Santa was coming! Everyone was asked to bring something, and I had decided I was going to bring Bacon Cheddar Deviled Eggs, until the night before when I found out someone else was planning on bringing deviled eggs. It was too late to go shopping for anything, time to go with what I had on hand. I had a can of artichokes, and spinach frozen, and Gouda cheese. Spinach dip is usually made with Parmesan cheese, but I didn't have any. I did have some mild cheddar, so I decided to go with both cheddar and Gouda. Almost everyone loved it. I say almost everyone because my friend's husband criticizes everything I make, he doesn't like onions, or garlic, or basically anything that gives a recipe flavor. I've learned to ignore him over the years. For this get-together I baked the dip, then I ended up making it again for New Year's Eve at another friends house, this time in the slow cooker. This Spinach Artichoke Dip is delicious either way! The heat from the slow cooker makes the dip less thick than baking it does, my husband preferred it baked, so I'm sharing the instructions for both ways.  The photo below the recipe is the original one from the slow cooker and taken with my phone on that New Year's Eve. For the baked version I originally used a mixture of Gouda and cheddar, the second time only Gouda. I loved the smokey flavor the Gouda gave, so I recommend using only that. 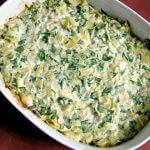 Prep and Cook time noted are for the oven baked method.