Boneless barbecue country style ribs with a homemade sweet and spicy barbecue sauce. Making delicious ribs at home is easier than you think! I hate mentioning sad things in recipe posts, but I also have always been open about my life outside of recipe creation. My cat, Macy Gray (yes, named after the singer) passed away yesterday while we were sleeping of liver failure. We knew it was happening, and tried everything we could. At first the vet wasn't sure it was liver failure, it was just that she wasn't eating and she was crying, so we were feeding her anything she would eat. Basically just little pieces of cheese and deli turkey. She would not touch her cat food. The final thing we could try was a steroid shot, which she was given on Monday morning. Unfortunately, she just got worse throughout the day. She was just under 14 years old. I don't want to think about it anymore, let's get back to these barbecue country style ribs, and the homemade barbecue sauce.

How do you spell it, barbecue, barbeque, or BBQ? I've never used BBQ, I'm just not a fan of abbreviations, or something. However you spell it, this sauce is made with no preservative ketchup, brown sugar, and cayenne pepper. It's sweet and spicy. It's not as dark red as many barbecue sauces, because I honestly forgot to add Worcestershire sauce at first, but it doesn't matter what the color, all that matters is the flavor! These barbecue country style ribs are tender, melt in your mouth ribs! Boneless ribs give you more meat with less fat, made tender by simmering before topping with the sauce and baking. They take a little bit of time to cook, but they are totally worth the wait! 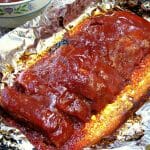