As soon as I saw the Italian Fest theme for this #SundaySupper I knew my friend Manuela from Manu's Menu  would make the perfect host. She was born and grew up in Italy, and now lives in Australia while blogging the most delicious sounding Italian food. I have tons of her recipe in my "Recipes To Try" on Pinterest, and had planned on making a pizza of hers to share with you today, but changed my mind after I realized I would then have shared two pizzas in a row after Monday's Margherita Naan Pizza . Oops! I love Eggplant Parmesan, and for years I pretty much followed the recipe from Scalinis Family Italian Restaurant,which has a unique story behind it that I first heard when I was pregnant with my daughter. It seems their Eggplant Parmesan puts pregnant women into labor! I've never even been to the restaurant, but I saw a story online about them, and decided to try it. I can't say that it worked or not really, I think I made it on Friday and our daughter was born on Monday, but she was due the next day anyway.

The only problem with their recipe is it takes a long time to make, and it makes a TON. Let's face it, this isn't a weeknight dinner even with my shortened version. It is a lot smaller though, about enough for a family of four. If you want to increase the amount of eggplant make sure to increase the amount of sauce. The sauce recipe below is my fixed version of what I originally tried to make, after I realized it wasn't enough. How do you make Eggplant Parmesan?

First sliced eggplant is salted, covered with paper towels and weighted with something heavy like a cookbook to pull out the moisture in the eggplant (leave it sit covered for thirty minutes to an hour), then dredged in flour and fried until crisp, topped with an easy sauce and fresh cheeses, then baked until bubbling.

Don't skip the salting and covering, it makes the eggplant crispy and delicious!

Eggplant Parmesan is one of the most common Italian dishes, but it is so good that I believe that everyone needs to make it at home! Read on after the recipe to see all the other great Italian recipes shared today. 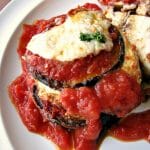 Join the #SundaySupper conversation on twitter on Sunday! We tweet throughout the day and share recipes from all over the world. Our weekly chat starts at 7:00 pm ET. Follow the #SundaySupper hashtag and remember to include it in your tweets to join in the chat. To get more great Sunday Supper Recipes, visit our website or check out our Pinterest board.Would you like to join the Sunday Supper Movement? It’s easy. You can sign up by clicking here: Sunday Supper Movement