I'm taking a break from sharing holiday recipes to share a easy and delicious weeknight dinner. A few weeks ago I got out a couple cookbooks and told Amanda, age 7, to look through them and find something she might possibly want for dinner. She's been more than extremely picky recently, even turning down foods she's eaten before, liked, and asked for the time she turned it down! I was an extremely picky eater as a kid, too, so I do get it. I know that letting kids pick out there meals sometimes helps and so does having them help cook. She picked out this Pad See Ew from Christine Ha's Recipes From My Home Kitchen. Christine Ha was the winner of season three of MasterChef. Legally blind since her twenties , Christine Ha had to relearn how to cook using her other senses. I loved watching her on the show so much that when her cookbook was released a few years ago, I bought it immediately. I wasn't really surprised that Amanda picked out this recipe from this cookbook, she loves Asian food, and noodles. The great thing about Pad See Ew is that it can be made with whatever kind of meat (or without meat) and stir-fry vegetables you like. Thin strips of meat and vegetables cook up quickly. I changed the recipe from the original by soaking the rice noodles instead of boiling them before adding them to the stir-fry, using broccolini instead of Chinese broccoli, and using low-sodium soy sauce instead of light soy sauce. We don't have an Asian grocery store around here, I wish we did!  I also increased the amount of soy sauce because I felt the noodles were too dry. I recommend starting with 2 tablespoons of each and increasing from there if needed. 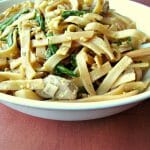