Homemade Bacon Horseradish Dip that tastes just like the popular brand! Made with real bacon, horseradish sauce, and sour cream, it's easy to make and full of flavor. I had been wanting to make a copycat version of Heluva Good! Bacon Horseradish Dip for a long time. It's my favorite of all of the Heluva Good dips! I tried to make it once last summer making the dip with refrigerated horseradish, but I didn't like it because it tasted to vinegary. I found a few recipes online that said to make sure the horseradish is well drained, but there wasn't really any liquid in it to drain.

This Bacon Horseradish Dip is almost an exact match to the favorite! The only difference is that the bacon crumbles are a bit bigger than the store-bought. I made them as small as possible by crumbling the bacon in my small food processor instead of trying to do it by hand. After that, it's just the horseradish sauce, sour cream, and a little bit of onion powder, so easy!

I made it again last night for munching on during the Super Bowl, along with Spinach Artichoke Dip and Cajun Ranch Wings. Too bad we weren't having a party, it was just the three of us. Oh, well, that just means more for me!

Here are a few more copycat recipes I've made over the years: 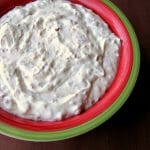